I had one of those "no good very bad days" Thursday that ended on a slightly positive note.

Let's start off with Rhiannon waking up at 2 AM and not wanting to go back to sleep until around 4. I guess my alarm went off at 5:15 before Keith left for work, but I didn't hear it. In fact, I didn't wake up until 6:45, when I had to leave to walk over to the school for Eli's therapy. Well, the super mom in me came out and I was able to take a shower, get dressed, get both kids dressed and out the door by 7:15. Huzzah for me. We arrived to his appt a little bit early and he had a decent time. He told me he played with playdo and bubbles. I am no longer allowed to attend his appt, which I am bitter about, but they say parents are too distracting. Instead I loiter in the hallway and feel bad for the teachers constantly asking me if I need help. It's right at the start of school, so I get to see all the wee rugrats in lines going to class and once again reinforcing the fact that I am GLAD I dropped out of school when I did so I didn't end up majoring in elementary education. DOOM I tell you. I loves my kids, but I don't love mouthy obnoxious ones. But every time kids would come by, I would comments on how cute Rhiannon is. Anyways, after we finished there, Keith picked us up so I could run him over to work so I could get the Gand Am. Yay for having one car he monopolizes. Then the kids and I ran to the hospital for her well baby. The appt was at 9:40 and I showed up, really embaressed, at 9:55. I really HATE running late. I'd rather not show up for something than be late (hence why I missed my sister's AIT graduation. Stinkin traffic). And what do they tell me? Oh look, your appt was at 9:20. The doctor couldn't squeeze me in and I felt awful and told them to reschedule the second I saw I was so late. They were able to fit me in at 10:20 though, that was good.

Her appointment was short and sweet, which I don't mind since we didn't have to see her regular mean peditrician I don't like. She's 24in and 13lb 2oz. So growing at a good speed. We did have a small issue, which I picked up a script for and should be working it's self out. Then she had to get shots. 4 of them. Did you know that flu shots are only allowed for 6-36 months, then the mist for 5 and up? That leaves 3 and 4 year olds out to dry. A bit unfair. I guess Elijah is just stuck getting sick, the poor monkey. Rhiannon got quite fussy the rest of the night, but she is fine now.

We went down to Jess' for a small BBQ and had a good time hanging out with her and the kids. So that made my day slightly better.

As for the rest of my weekend, it was Keith pretty much being a bum since he's learning to get used to doing this staff duty buisness. I cleaned a bit and moped because it was raining and once again, i couldn't take the kids to the pumpkin patch.

Ive been doing a ton of research on cloth diapering this weekend. Keith is still completely grossed out by the idea, but I think he will catch on when I finally find some diapers to try. It's so expensive to figure out what you want. I am overwhelmed with choices, but think I have finally settled on something. I'm such a crunchy mom anymore, nursing, making my own baby food, cloth diapering. But as my mom says "thats not hippy, that's being CHEAP". I'm just trying to save a buck since we're poor. And will be much poorer in a few months.

Speaking of that whole idea, I guess Keith and I have decided to try to attend Weber State at the same time. That should make life super exciting. I'm tired of staying at home, mostly because I am tired of being a maid. I don't want my life to consist of cleaning up after everyone forever. One of these days I'm just going to go psycho and chew everyone out until they decide to get off their duffs and help me. And not just halfassed cleaning. I'm tired of fighting with Elijah for hours to get him to pick up his laundry. Yeah, I need to work that bit out and quit bitching right. haha.

Anyways, the beeebs is getting hungry again, so I have to go feed her. Just wanted to make a quick post. Im thinking about my friends in Hawaii (Andrea, Eileen, Susan, to name a few) and I hope ya'll are okay!! 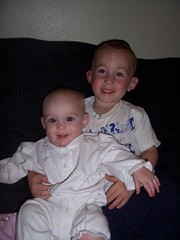 The kidlets
Originally uploaded by djjustyne.
Rhiannon says THANKS FOR THE NEW CLOTHES AMY!!! (notice the outfit plz) :)